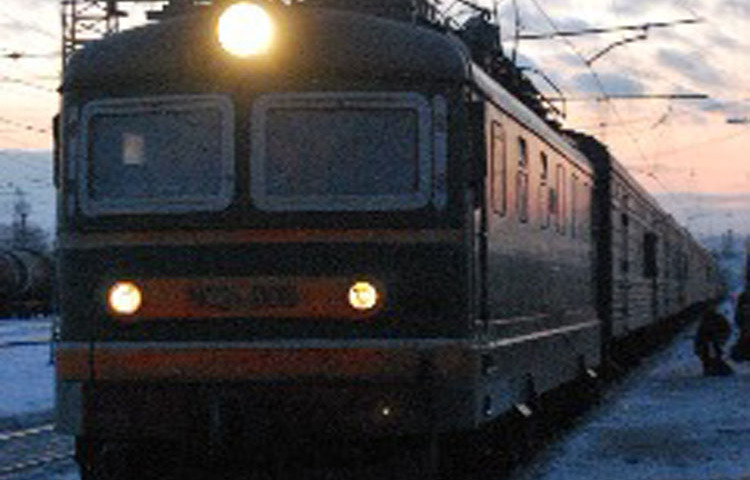 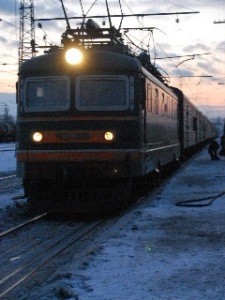 Sometime during the night we passed over the Ural mountains and through Ekaterinberg (famous for being the birthplace of Boris Yeltsin and where the Tsar and his family were murdered in a basement); we have therefore now, formally passed into Asia and Siberia.

Outside the temperature has dropped again and it has started snowing; at one point there is a complete white-out.  These are not the big friendly snowflakes we see at home, these are vicious little snow needles, whipped along by the wind that would scour the skin off a rhino’s bum – this is Spring in Siberia!

In recognition of this milestone here is a short but fascinating compendium of facts (warning: at least one of these is complete rubbish but then you should never fully trust what you read on the internet)

1. Siberia covers around 3m square miles and has a population of about 32.5m.  That’s less than half the population of the UK in an area 12 times the size.

2. Much of Siberia is covered in Taiga (meaning frozen jungle). There is more forested area in Siberia than in the Amazon – 30% of the world’s trees grow here.

3. Siberia was first inhabited over 500,000 years ago by stone age nomads.  Today there are many tribal nations within Siberia including the Nenets, the Eveny and the Evenkiy.  Only one native Siberian word has made it into the English language – parka.

4. Siberia has few mountain ranges in the North to keep out the cold arctic winds.  It is also bounded by ranges in the South and West that prevent warm air from travelling northwards.  As a result the land cools very quickly in the winter and heats rapidly in the summer.  The Verhoyansk Mountains are the coldest inhabited place on earth and have recorded the widest temperature range in the world – from –60C in winter to +45C in summer!

5. On June 30th 1908 the largest meteorite in modern times struck the Tungska region in Central Siberia – it made a blast that was heard half way around the world, flattened 2,500 sq miles of forest, injured 6 people and killed a dog. (Nicolas Tesla, father of modern electromagnetic theory, was on the other side of the world at the same time, experimenting with a method of transmitting energy around the globe.  For many years he believed he had caused the explosion at Tunguska until someone pointed out it had been on a different night).

6. Siberia was, for many years, synonymous with exile and punishment.  Between 1914 and 1946 the population of Siberia doubled – largely due to people being sent as forced labour to work in slave factories and gold mines.

7. Lake Baikal is the largest freshwater lake in the world.  Two thirds of the species living in the lake aren’t found anywhere else.

That really is enough facts.