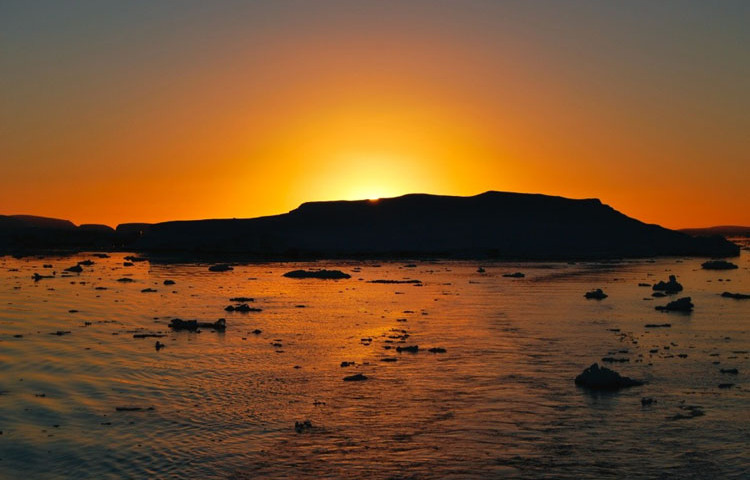 Only one wild creature has ever been sighted at the South Pole, a Southern Petrel; an opportunistic bird that was most likely sifting through the rubbish bins of the other main species to be found there – Americans!

The Americans set up a base at the South Pole in 1959 and have been there ever since. The Russians, on discovering that the most desirable piece of real estate had already been taken, elected to set up their own base at the so-called “pole of inaccessibility” – the point in Antarctica that is furthest from any part of the coast (you have to admire the Russian sense of one upmanship).

So while the Americans now have a base that is superb for astronomical observation, the Russians have inherited lake Vostok – a 250 km long, subglacial lake, sealed off beneath 4,000 metres of ice for at least fifteen million years. This holds the exciting prospect that it may host species which have evolved in a completely different way. Current plans are to drill into the lake and send in a remote camera. Prospects are high for discovering a new species of cold water prawn or some sort of spineless blind-worm (although personally I am pinning my hopes on finding a many-tentacled flesh eating shape shifter – surely these people have seen “The Thing”? )

I have finally arrived home two days late, the journey from South Shetland to North London having taken five days in total. Alright this is nothing compared to the three years it took Shackleton to get home in 1917 but it still serves to underline a basic truth – Antarctica is a very very long way away. In many senses of the word.

For the home bound journey I have a centre seat (never a favourite) sandwiched between two extremely large, bald, moustachioed men who look like they have just ridden down off the Argentinian plains (either that or they are auditioning for the Village People) – in a row of three seats they take up a seat and a half each. It really is a very long way home.

And now I am home I am faced with another problem. When people ask me what Antarctica was like I find that words fail me. ‘Fantastic’ I say, (not that impressive for an alleged writer) closely followed by ‘unbelievable’ (getting worse) – I even catch myself saying ‘unparalleled beauty’ to someone ( obviously I am sub consciously shooting for a career in travel brochures).

So I show them my photographs (I have to admit that, even for a non photographer some of these came out quite well). But when I look at them they simply don’t capture the beauty of the place – it feels like having the experience through a thick, plate glass window. Neither photographs nor my lame descriptions will ever capture the sense of space, the sun-washed icebergs, the gin-clear air or the feeling of being a very small dot in an extraordinarily beautiful landscape.

London, however, has its compensations. I am delighted to be reunited with my luggage and to have no restrictions on how many times i can change my underwear. And it’s great to be back with the family and to have the opportunity to ‘big up’ my adventures (although the kids have been here before and they have acqured a cynicism beyond their years).

Returning home after an adventure is always great but conversely also feels slightly sad and I am painfully aware that The City is a very long way from the wilderness. Then again, there can be few other places in the world where the many tentacled, flesh eating, shape shifters get to wear suits and go to the office like normal people.