Thanks, but I had bugs for lunch

Back in the bubble 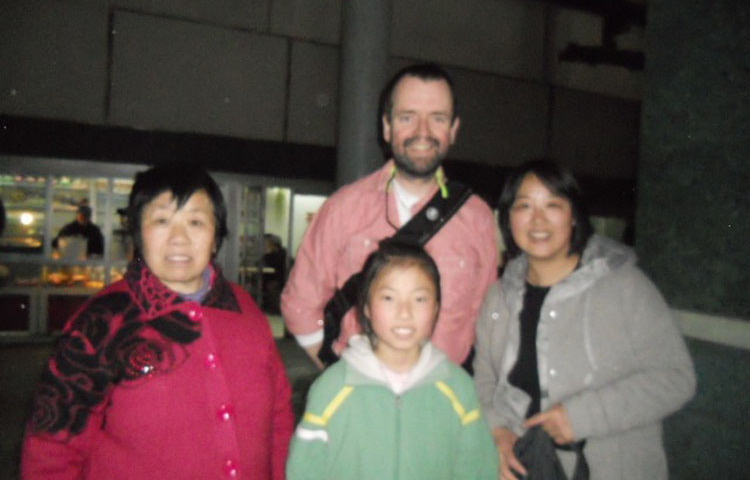 “Can we take your picture please?” She is about seventeen and accompanied by three generations of her family.  Standing in the queue for the cable car at the Great Wall they have been giving me sideways looks and giggling for a while.  Now they all want to take turns being photographed next to me.

They save a seat for me in the cable car and video the whole journey; I am invited to leave a message for the family back home.  Grandma can not restrain her curiosity, she keeps poking me and touching my beard; she wants to know if I am cold wearing only a shirt (it is 20 degrees).

At the end of the cable car journey there are more photographs with me in the middle, a good foot taller than any of them and looking like some wild man they’ve lured down from the mountains with a piece of meat.  I seriously wonder what voiceover they will give these photographs when they get home.

However, it is impossible to take offence, they are delightful and very curious without being rude.  This is not the first time it has happened; in the course of three days in Beijing I am approached half a dozen times by complete strangers who want to take their picture with me.  Helen tells me that, for families living outside Beijing, it can still be unusual to see a European face, hence the level of interest.  I’m starting to feel like the elephant man.

The Great Wall is stunning and snakes over the peaks of a dozen mountains in both directions; it is also unbelievably crowded.  It is said that a man is not a man until he has visited the Great Wall and the particularly steep section at Badaling has been designated the most desirable part of the wall for proving manliness.  On a sunny Saturday afternoon, it draws thousands of people who flock to climb the steep steps to the heroes wall; it feels less like seeing one of the new seven wonders of the world and more like trying to leave a Madonna concert.

I stop off at a small restaurant on my way back to the hotel where my usual ‘point and hope’ method of ordering fails me and I end up with a casserole made of chickens’ feet – I must admit I find this rather hard going.

In general the more I walk around Beijing, the more it reinforces the impression of being a very civilised place.  The streets are meticulously clean, there are public toilets on every corner (with an attendant to look after them) and, despite being out on a Saturday night, I see none of the public drunkenness that seems almost compulsory in London.  I have no doubt that this is not a perfect system but on some very basic levels it seems to function very well.

This morning I reserve two hours to visit the Forbidden City.  Five and a half hours later I am still there.  I don’t recall ever having seen a place so beautiful or on such a scale before; I am overwhelmed by it and it is only complete exhaustion that stops me staying longer.  On the way out I am stopped by two young men who brandish a camera; “take picture please?” I smile and fall into my practised routine, standing next to one of them in a matey sort of way so he can get a good shot of himself with the hairy foreigner.  They look confused; “no, you take our picture please.”

Clearly I am losing my novelty value in this town.